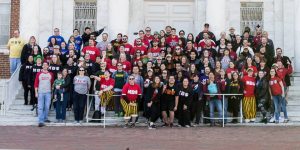 Mu Beta Psi is one of the nation’s oldest music Fraternities. Founded on the campus of North Carolina State University in November of 1925, we serve four main purposes:

We are a group of individuals from many places with many interests sharing a common love of music. Mu Beta Psi provides a unique opportunity for students with an interest in music to serve together.

Honorary
Brothers are selected for their love of music and commitment to its advancement within their university and community, while maintaining academic excellence. 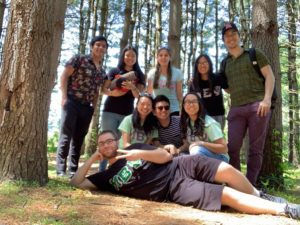 Committed to Performing Acts of Service

The Brothers of Mu Beta Psi provide service to musical organizations on their campuses, including ushering university sponsored concerts, assisting in planning concerts or recitals, and hosting receptions for visiting artists.

Active
Social gatherings within the Fraternity and with other groups include intramural sports, talent shows, and fundraisers. Such activities make us an integral part of the collegiate community.

A Brotherhood
The Brothers of Mu Beta Psi are united by a love for music and a desire to promote it within the community. Brotherhood is the most rewarding and fulfilling aspect of our Fraternity life.

-Mu Beta Psi currently has Brothers at six collegiate Chapters in five states, plus a national Alumni Association.
-Mu Beta Psi is a student-led organization, with Brothers organizing, leading, and participating in Chapter activities. Faculty advisers provide direction only as needed.
-Founded as an all-male organization, Mu Beta Psi became co-ed in 1972. Uniquely, all members, regardless of how they identify, are called “Brothers”.
-Membership in Mu Beta Psi is not limited to music majors. By drawing in musicians of every discipline, Mu Beta Psi helps to unify the music community.