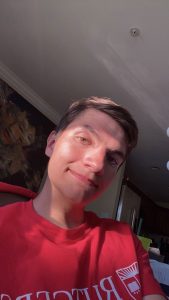 One of the main reasons I wanted to come to Rutgers was because they had a marching band. In high school, music was my everything, and I knew that I wanted to continue it in college. (This is also why I am pursuing a music minor). I also live 1.5 hours from Rutgers, so it is far enough to be away from home yet close enough if I wanted to go home for the weekend. I was actually accepted into Rutgers for a cell biology and neuroscience major, but I quickly switched to psychology because mental health is a huge passion of mine, and Rutgers offers so many great opportunities in the field such as a diverse repertoire of psychology classes and many opportunities for research.

My Rutgers experience has been great so far! I love change once in a while, and living at Rutgers has given me the opportunity to live on my own and mature. I sought out a multitude of clubs (like Rutgers BRAIN) and great organizations (like the marching band) on my own and even pushed myself to come to a Mu Beta Psi rush event. I couldn’t be happier that I did because now I am a part of this great organization! Some of my favorite classes include Social Psychology, Abnormal Psychology, Concert Band, and Jazz Appreciation.

I have wanted to play the flute ever since I was little. I used to have dreams of playing flute on a big stage in front of thousands of people and I just love the sound of the instrument. You can play fun runs in pieces as well as beautiful solos. My family members play percussion, bass, and guitar so I am the lone woodwind! I also decided to start learning to play piccolo in middle school. It was always the one lone instrument in the band, and I thought it would be cool to play the one instrument that could be heard over the entire ensemble.

I joined Mu Beta Psi because during my first semester at Rutgers, I had a hard time finding my crowd. I was involved in a surplus of programs where I met a lot of great people, but none that I completely clicked with. After hearing about Mu Beta Psi during marching band, I decided to push myself out of my comfort zone and go to rush week. From there I met people who I had a ton in common with that instantly welcomed me with open arms and allowed me to be myself. The rest is history 🙂

Being in Mu Beta Psi has been such an amazing experience so far. I have been able to make so many friends and travel to places I’ve never been to before. Spring of 2019 I traveled to Tau Chapter to see their Member-in-Training class of 15 be initiated, and it was my first time taking a train, being in D.C, and having the chance to see the Lincoln Memorial and the Washington Monument! I was also able to travel to convention last year in SUNY Oswego and had a blast protecting our mascot Henry from other Chapters 🙂 I have also been able to hold various leadership positions in the Fraternity, grow as an individual, and come out of my comfort zone a little. As of Spring 2020, I was able to hold two positions in Mu Beta Psi. Shortly after my initiation I was elected Historian/Webmaster and now I am New Member Educator!

That’s a hard one because I have so many! The one that I always find myself coming back to and laughing was the day that my Member-in-Training Brother Caitlyn Chow dropped me in our pitch video for Pi Convention 2020. Caitlyn and I underwent our Education process in Spring 2019 and a few Brothers were making a pirate themed video for our Convention theme pitch. Caitlyn and I were supposed to do a service event that day that got canceled and so we went to help film! There was a scene where we did a Scooby Doo chase scene and I told Caitlyn it would be hilarious if we ran into each other in the hallway, I jumped on her back, and we escaped into a classroom. When we decided to film this really stupid idea, Caitlyn started running with me on her back and the weight of my body sent Caitlyn to lean forward and I toppled over her and my entire body smacked onto the tile floor. My instincts were to immediately get up because we were filming and you can see in the video that Caitlyn immediately got up without even checking on me haha. Once in the classroom I was in so much pain but we were laughing so hard and saying how one day we would look back at this and laugh. Needless to say, my right knee was super bruised for about a month. Feel free to watch it occur!

In my free time, I like to watch YouTube videos and listen to music. For YouTube, I watch gaming videos, Good Mythical Morning, the Try Guys, Dr. Phil, and a bunch of other random channels. I listen to a wide variety of music including, but not limited to, concert band songs, jazz, pop, rap, musicals, etc.

My advice would be to come out to an event and see what we are all about! As a freshman, I pushed myself out of my comfort zone and came to a rush event, and I had an absolute blast! The event was so fun and all of the Brothers took the time to come talk to me and ask me questions about myself as well as provide me with information on their organization. Everyone was so kind and welcoming and I knew I wanted to join Mu Beta Psi.